I don’t like music in the workshop, I prefer silence. Music manipulates my mood too much, interfering with the process of making. If the job in hand is tedious or repetitive I have BBC radio 4 playing, but over the course of a day the constant replay of news is depressing so I like to turn that off too. It does get lonely with only the canines to talk to when the sea dog is away. If I haven’t been down to the village for a day or so the company of the radio is comforting but quickly becomes a habit. Music is effective at blocking out difficult thoughts and feelings which need to be thought and felt, looked at and questioned as part of the making process.

Of course there is no complete silence: The wind in the old trees to the north of the studio, the rain and hail clattering against the windows roof, seagulls and rooks. On those rare, blessedly still days there is birdsong, sheep bleating, the distant sound of waves and the hum of the transformer on the pole (so not quite paradise but near enough, unless I am wood firing and then the crackle of the flames transforms the inferno into my kind of heaven).

Now for the Japanese bit, we are in the Kyoto gallery of Robert Yellin. Gallery does not do it justice. It’s more of a front room, the kind kept for Sunday best and visitors, but a little more comfortable and chaotic than Grandma would have kept it. It feels uncommercial like the private collection of a friend. Relaxed, despite Mr Yellin’s intimate knowledge of Japanese ceramics which could be intimidating in anyone less welcoming. His enthusiasm and love for the subject pervades the space entirely.

I am looking at a group of sake cups made by various potters. One catches my eye, a dark green oribe glaze bisected by a thick white shino, tinges of pink where the two glazes meet. The clay has been wire cut into rough facets allowing the glaze to pool thickly in the crevasses. Lovely but not the colour I am looking for. I pick up another, wander off to a different display. Someone pulls open a drawer to reveal more of the sake cups. Another oribe or two, they don’t interest me. I pick up the the first again, holding it whilst trying to ignore it, absent mindedly looking at other pieces. It’s not what I want, I think, but I daren’t put it down, someone else might notice it. And then at some unrecognised moment I know that I am not leaving without it. 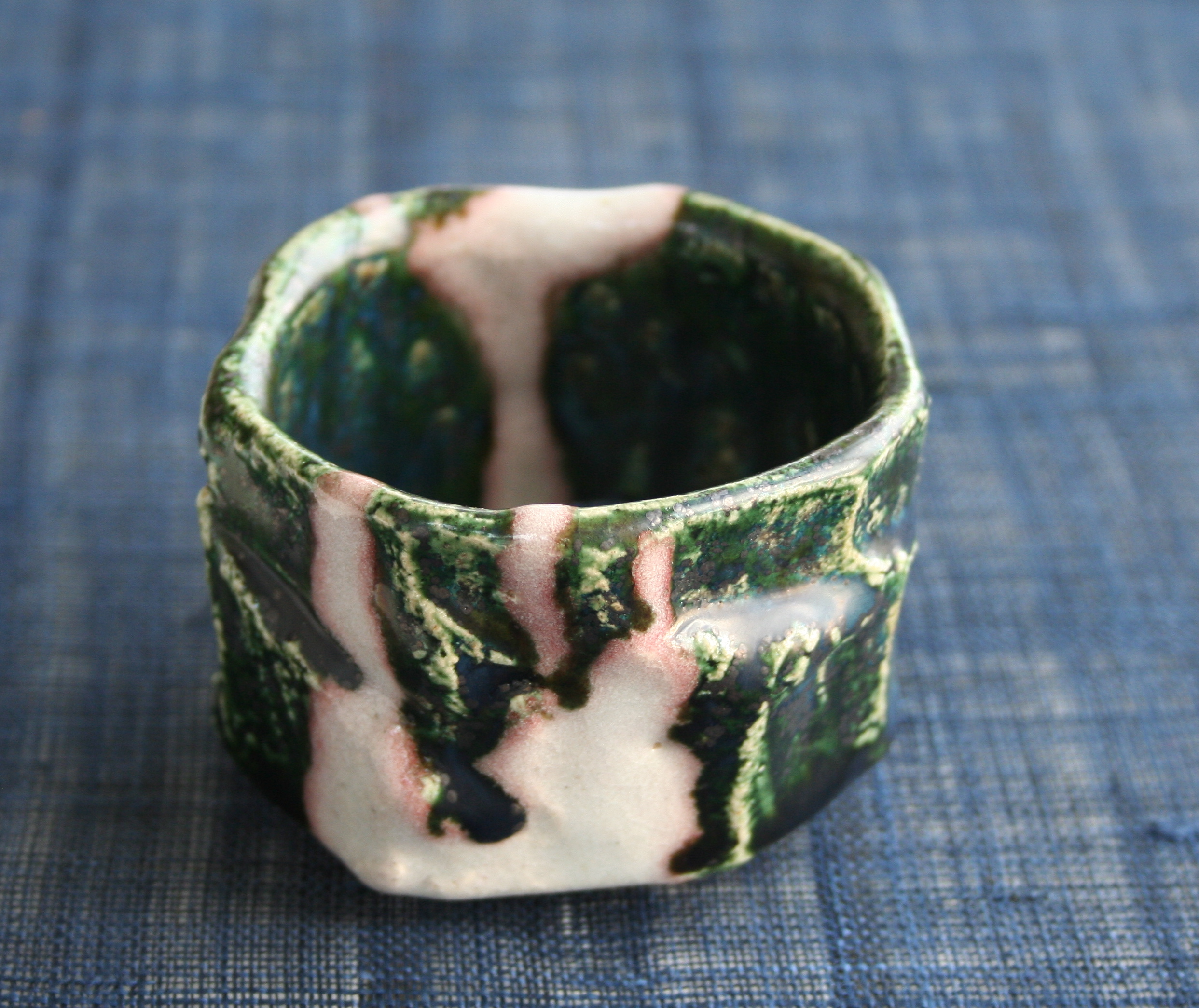 The transaction is made. During the process we admire the piece and learn the potter’s

name, Kouchi Hidetoshi and some details about him, he hasn’t been well but is working again now. There is more chat which moves on to music. Mr. Yellin is a bit of an old rocker, something unobtrusive is playing in the background. Now I am aware of the soundtrack I can clearly remember that it collided with the feel of the pot in my hand and in my vision to produce a moment of memory which didn’t reach my consciousness at the time. Fleeting and exquisite, it was the instant the pot became mine. Not an act of material acquisition, but a proof of the connectedness of people. A potter makes a piece which sparks a memory in someone from from the other side of the world, and the pot then becomes a part of it, renewing the memory with each use.

Not seeing at all,
We cannot see all there is around us.

Everything is but an expression of the self.

I buy something –
I have bought myself.

From ‘The Windows of Life’ …. Some thoughts by Kanjiro Kawai

(The music was ‘The Pearl’ by Brian Eno and Harold Budd, the specific track ‘A stream with bright fish’. I’m listening to it a lot in my studio now)