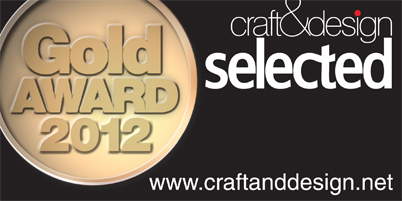 These highly regarded national awards, first launched in 2009, are based on an Online Public Vote for British and Irish designer makers with work represented in Selected, craft&design’s prestigious online gallery at www.craftmaker.co.uk.

The Public Vote determines six finalists in each of six categories. Specialist Invited Judges, together with the craft&design panel, subsequently assess the work of the finalists to establish one Gold Award Winner, two Silver Award Winners and three Finalists in each category, with just one person being awarded the top accolade of craft&design Maker of the Year Award.

Patricia Shone’s work has an energy and physicality within her surfaces that combines the human action of moving tools and hands over and within the surface of clay. Each piece has a sense of movement as if the process of making is ongoing, pots are almost still being rotating, it’s this movement combined with the applied surface decoration and form which made the work stand out as a gold award winner.

The development of her making processes and continuing technical development was well expressed and will add to the future success of her work as a maker.