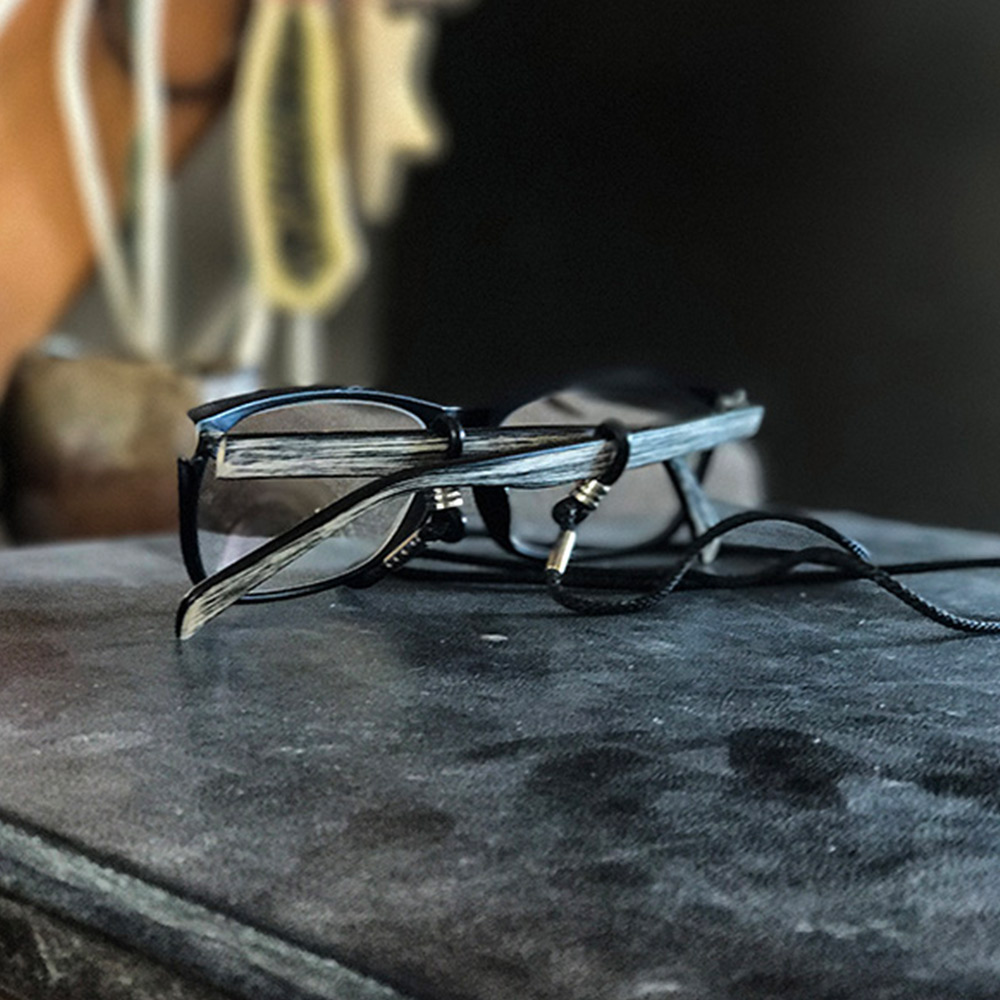 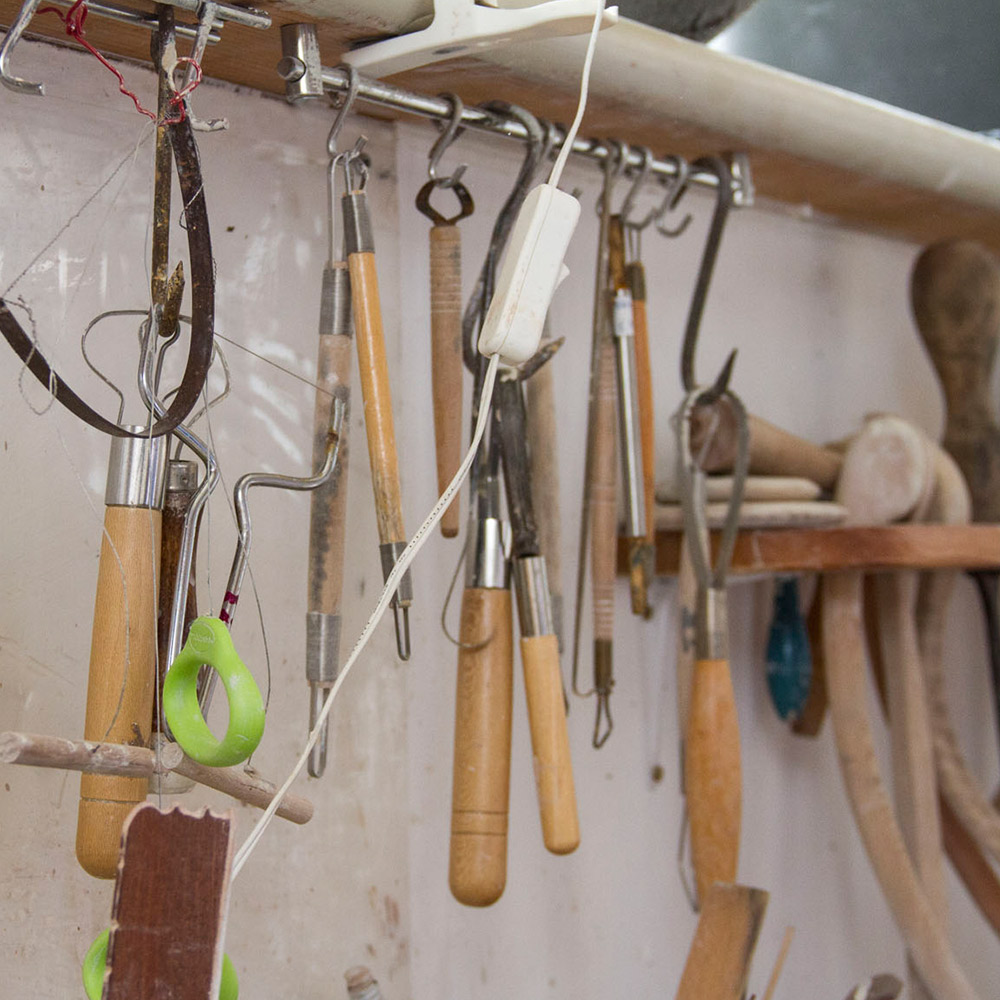 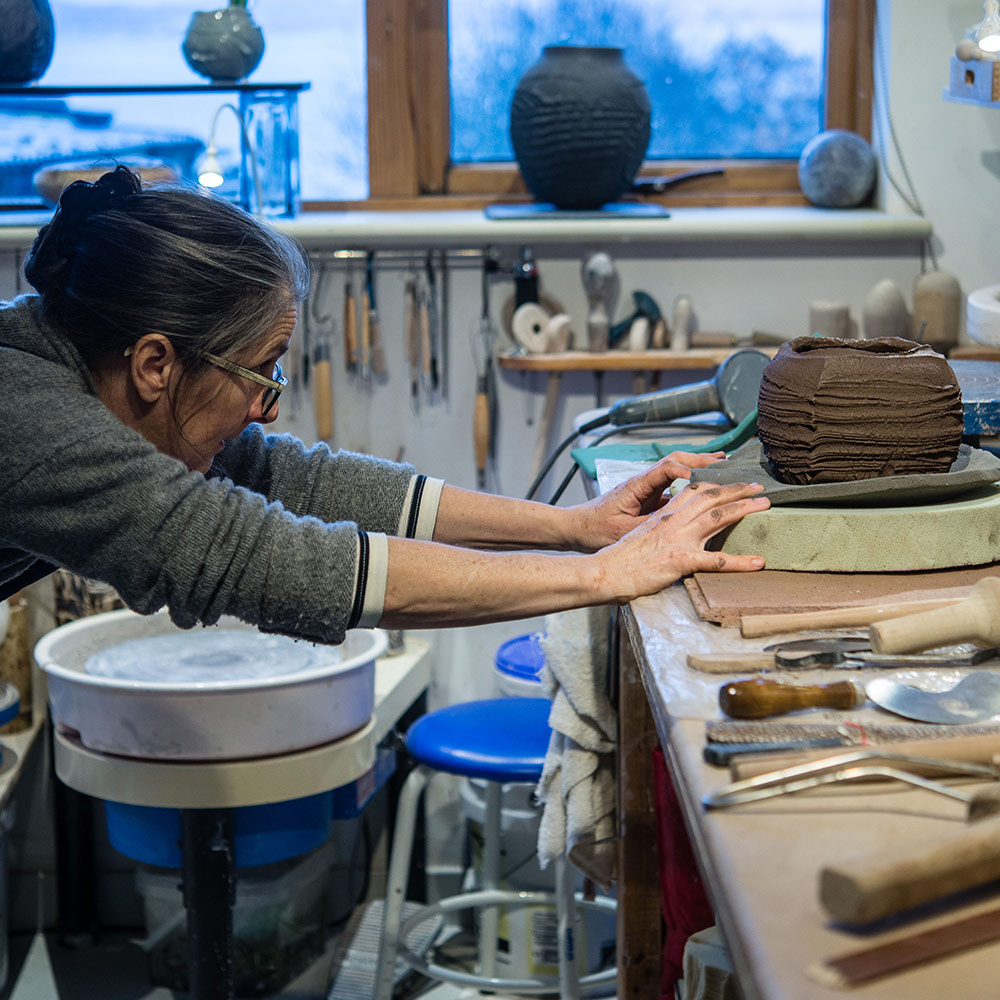 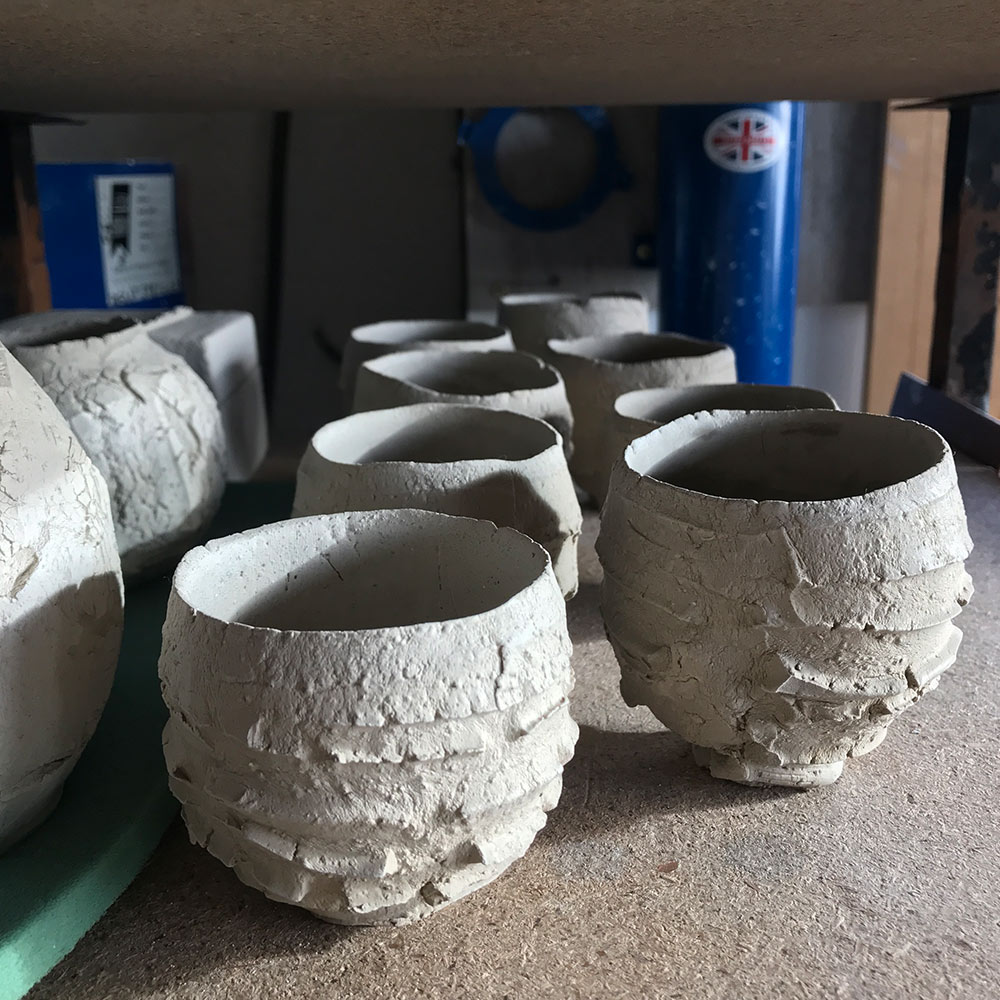 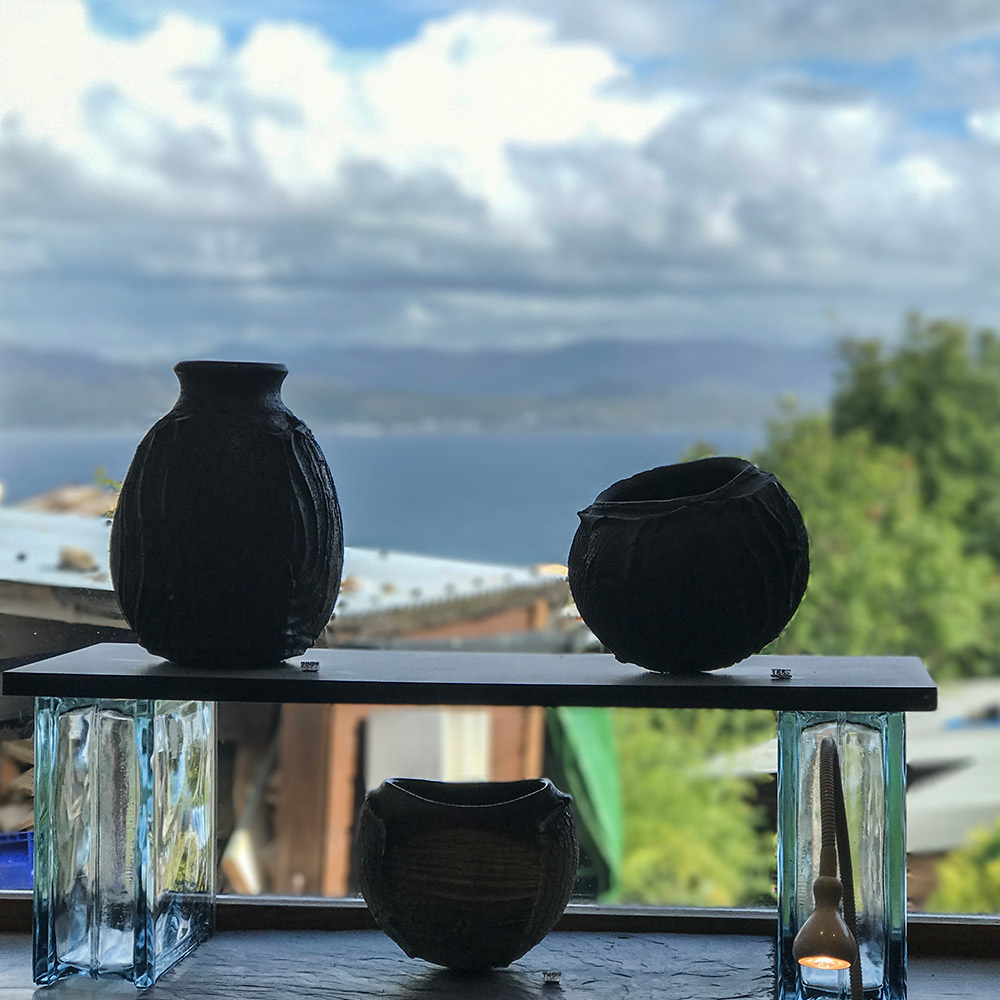 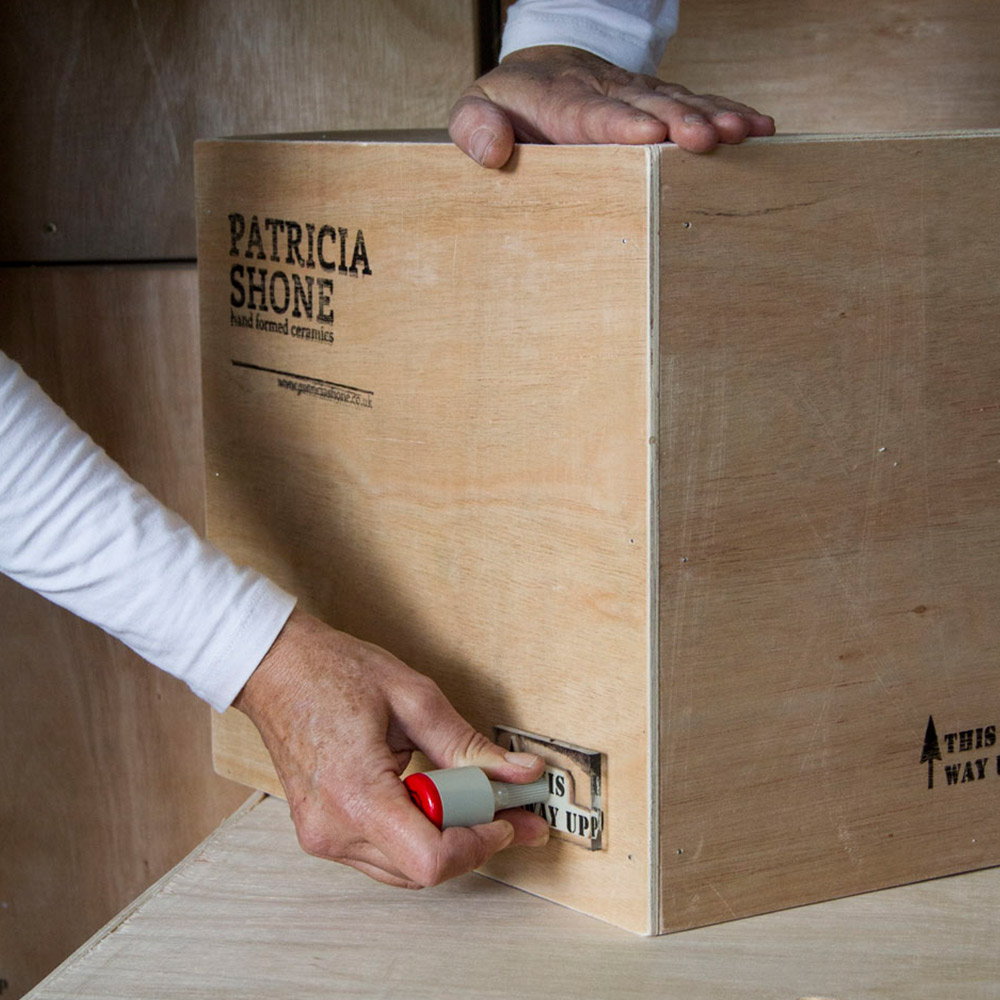 Patricia Shone was born in Scotland but grew up in South Devon where she met clay at school. After studying ceramics in London, finances and a love of cooking led her into work as a chef both there and in Italy. Eventually, this took her to Skye where she returned to potting and where she has remained for over twenty years. 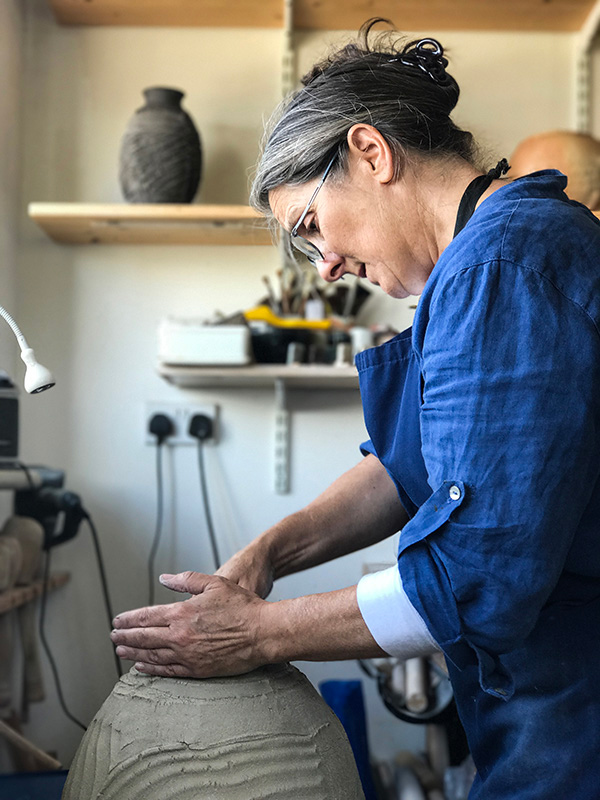 “There is an inherent inspiration which is a person’s fundamental being. I think an artist’s work can be a search to find expression for this, consciously or unconsciously. This is the deep essence in a work which can connect one human being to another.
My work is informed by the powerful landscape around me on the Isle of Skye. It developed in response to the feeling of connection with its inhabitants and their passage across the land. By walking the paths of predecessors I contribute to the formation of the paths at the same time as obliterating previous footsteps; as an incomer to this community I absorb and am changed by its culture whilst altering it by my presence here. The nuances of contradiction in the human experience of life are very visible here, but the community survives, just as the surfaces of the land are eroded but the substance of it remains constant and immutable.

I make mostly functional forms, boxes, bowls, jars, rather than direct representation of the landscape, because they are innately human vessels; they represent the human condition of surface and content.
The natural textures produced by clay reflect the formation and erosion in the geology of the land. The techniques I use to make my pots encourage the development of these textures on the surface of a controlled and formal vessel.
It has taken many years for me to begin to understand this path in my work, and that our scars from living can be seen mirrored in the scars on the land.”

Patricia has developed techniques in her clay work which reflect these processes. The pieces are hand formed by texturing and stretching. Sometimes by throwing, sometimes carving, all from solid lumps. The muted colours are achieved with oxides, slips and glazes but most of all by different clay bodies and the firing processes.

“I want the natural forms, colours and textures of the work to engage the viewer with a landscape beyond daily experience. As we develop, technologically, the surfaces we touch become increasingly synthetic and machine finished. I feel that what challenges us now is the reality of nature – wild, uncomfortable, dirty, unpackaged, visceral experience.”